Exclusive: Reggie Watts on Silencing the Stigma of Cannabis

Exclusive: Reggie Watts on Silencing the Stigma of Cannabis by Anthony Elio

Whether you know him from his comedic musical performances on IFC’s Comedy Bang! Bang!, his role as bandleader for The Late Late Show With James Corden, or his hilariously bizarre TED Talks, there’s a good chance you’re familiar with comedian/musician Reggie Watts. Named one of High Times’ “100 Most Influential People in Cannabis,” Watts has long been an advocate for the substance, with an original song about Marijuana Day, an appearance on Viceland’s Bong Appétit, and even social media posts about legislation.

In this exclusive interview, we discuss breaking the stigma around cannabis culture, his new collaborative album, and his creative strain name ideas.

Cannabis & Tech Today: Why do you believe there’s still such a stigma around marijuana?

I just don’t think they understand what the definition of a drug is and don’t understand someone’s own ability to choose what they want to do. And so, if they’re against marijuana they might as well be against all over-the-counter medications, alcohol, tobacco. Like, all of it. It’s the classic argument that, y’know, alcohol does more damage than marijuana ever, ever has.

C&T Today: What is your personal method for destigmatizing the substance?

RW: Only that I talk about it freely and I promote using it responsibly and using it as an experiment. Experimental use as opposed to a way to self-medicate. I just think that there’s an adult way.

I promote the adult usage of marijuana. Generally marijuana is always promoted as … kind of like Monster energy drink. Everything is like a Monster energy drink. It has to be the maximum high. Taking you to beyond your limits. Can you handle the high? Skunky, icky, sticky … whatever all of that stuff that people talk about with weed and stoners.

Now is the opportunity to look at it more medicinally, in a more refined way. Like this Mondo powder. It’s 5 milligrams but it doesn’t floor you, it just makes you feel really good. The industry is pursuing research on how different components of it or different methods of refining it can yield different medicinal results.

I think for me, I’m always promoting that side of it. Like micro-dosing. A better way to ingest it than smoking it, which can be harsh on your lungs. I just approach it from that way. That’s how I promote it. 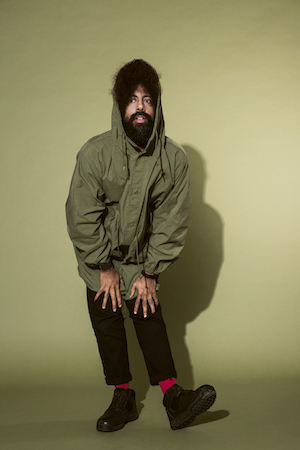 C&T Today: Do you ever see yourself moving into the business side?

RW: I was talking to a company called COC Dynamics out of Portland, Oregon. I think they’re setting up shop, doing some extractions in California. And I was thinking about creating these low-dose marijuana or cannabis pills. So I have, but I’m not much of a business person in the form of, “Here’s a product!” Aside from my performances or whatever. It would have to kind of flow … but I’ve definitely thought about it. For sure. Being part of the kind of responsible usage of it.

C&T Today: I know you’re also hosting a Taskmaster on Comedy Central. What do you really think will make the show stand out?

And that’s really the appeal of it. Because when someone’s performing a task they have to go to this problem-solving mode and some people can try to hold on to their caricatures and things like that, but it really falls away pretty quickly.

And not only that, but in the U.S. version not everybody is a comedian either. It ends up being very funny, but we have D.J., we have an actor. We definitely have a little bit of variety more than just comedians. This show’s fun for anybody.

C&T Today: You’ve also got the new album coming out as a collaboration with John Tejada. Can you tell me a little bit about the inspiration behind that?

RW: I’ve always been a fan of dance music, electronic music, and I’ve been a big fan of John Tejada, local producer in Los Angeles, for many, many years. I had the opportunity to meet him one day at a gig he was spinning at. He was just such a sweet guy, local dude, and we just kept in contact. I didn’t really plan on asking him to do a project outright, but over time we kind of asked each other, “Oh, you want to mess around on a track or something?” And then we got together and it was super easy to make a track; it was super fast and that’s exactly how I like to work. Really, really fast. In the moment, no preparation.

And he made these amazing dance tracks and we decided to make it into a project. Which is something I’d been wanting to do for a while but I just couldn’t find a producer that could work as fast as I like to work.

C&T Today: Do you have a dream collaboration?

C&T Today: One that I’d definitely love to hear is you and Devo.

RW: Yeah, Devo. Certainly. I toured with them. I opened up for them for six shows. I felt really lucky to see that. Devo could be cool, I mean there’s not many of them left now. It could be cool.

C&T Today: I saw on Twitter once you wanted a strain named “Strawberry Snarfcakes.” Do you have any other strain names in mind that you play around with?

RW: It probably already exists, but I think Thunderf***. I was thinking of a monster-truck style cannabis strain. Or one called Shmoopie, pretty good. Shmoopie’s Dream. I wish someone came up with new strains and they described the high and I became a namer. That would be great to be a weed namer. Namin’ strains is my new game.