Education and Cannabis: The Great Unifiers

Education and Cannabis: The Great Unifiers by Veronica Irwin

When a new cannabis user asks their budtender a question, they expect to receive an accurate answer.

Given that many doctors still don’t understand the medical science of cannabis, budtenders become even the medical user’s primary resource to understand dosing, cannabinoids and terpenes, and measures of quality.

But according to cannabis education expert Emma Chasen, most of those budtenders don’t get nearly enough training to be good stewards of cannabis.

“They go into these entry-level positions expecting some kind of educational opportunity, some kind of upward mobility, some allowance for growth and opportunity in this industry, and they often just don’t get it,” she says.

Budtenders, she argues, aren’t just any retail workers  — many of them have big dreams of moving up the ranks in the industry, and take on entry level roles expecting to learn the ropes.

Yet, they’re often met with overworked managers with little bandwidth or resources to properly train their employees.

As a result, many consumers who are new to cannabis get poor recommendations that either don’t suit their needs — or, in the worst of cases, are too potent and scare the user away from cannabis entirely.

It’s a losing situation for young professionals, users, and businesses.

The instructional video and quiz-based program breaks down the science behind cannabis into digestible, bite-sized chunks for anyone who wants to learn more information about the plant.

“We really wanted to make something, as far as educational resources go, that had personality, that was fun, that was engaging, and that was also rooted in scientific information,” says Chasen, who herself appears as the instructor in the short 5-10 minute video lessons.

Chasen’s own cannabis background is rooted in education — she first started experimenting when she was in a freshman seminar titled Botanical Roots of Modern Medicine at Brown University.

After graduating she went on to do Oncology research at the University, but packed her bags and moved west when her supervisor rejected a cannabis trial.

“My supervisor just laughed him out of the office, basically, and that was the straw that broke the camel’s back,” she says.

Once she arrived in Portland she got a job as a budtender, and quickly worked her way up to general manager and then director of education at science-focused dispensary Farma.

Plant medicine runs in Chasen’s blood, too — her “very Italian, matriarchal, New York family,” has roots in the volcanic island Ischia where her great grandmother was considered the “strega verde,” or “green witch.”

She describes her family’s naturopathic traditions as leaning towards “puritanical,” however, and her family as resistant to making cannabis a part of their lexicon.

As in other spheres, education proves to be a unifier in the world of cannabis, too.

Chasen’s pursuits in cannabis education have helped her family come around to pot — so much so that some of them are now using non-psychotropic options like CBD.

“I’m creating analogies to other medicinal plants especially in the folk tradition of the Mediterranean, like oregano and neem and primrose and all these other plants that we have been using for centuries in my family line and going ‘this is no different, it’s just been stigmatized,’”  she says. “I really try to educate them.”

It’s further evidence of how cannabis education can both reduce stigma and get plant medicine in the hands of people who can benefit.

It’s also evidence of how effective Chasen is as the teacher.

The videos are engaging and informative, with just enough personality to feel compelling and fun without coming off cheesy.

Eight courses are available, each with video lessons and companion quizzes to help retain information.

The lessons often go into great detail: a course on consumption methods, for example, even covers topics like bioavailability and mucosals.

The majority of Eminent’s education clients are emerging entrepreneurs in the cultivation and dispensary sectors without the time or resources to build out their own staff training curriculum.

She believes that having a well-educated workforce can actually boost revenue for these businesses, in addition to ensuring consumers have better access to accurate public health information.

“If their staff is better able to help customers and patients, that’s how you generate the customer loyalty and retention that so many businesses are looking for,” she says.

However, enthusiastic customers can enroll in the courses, too. 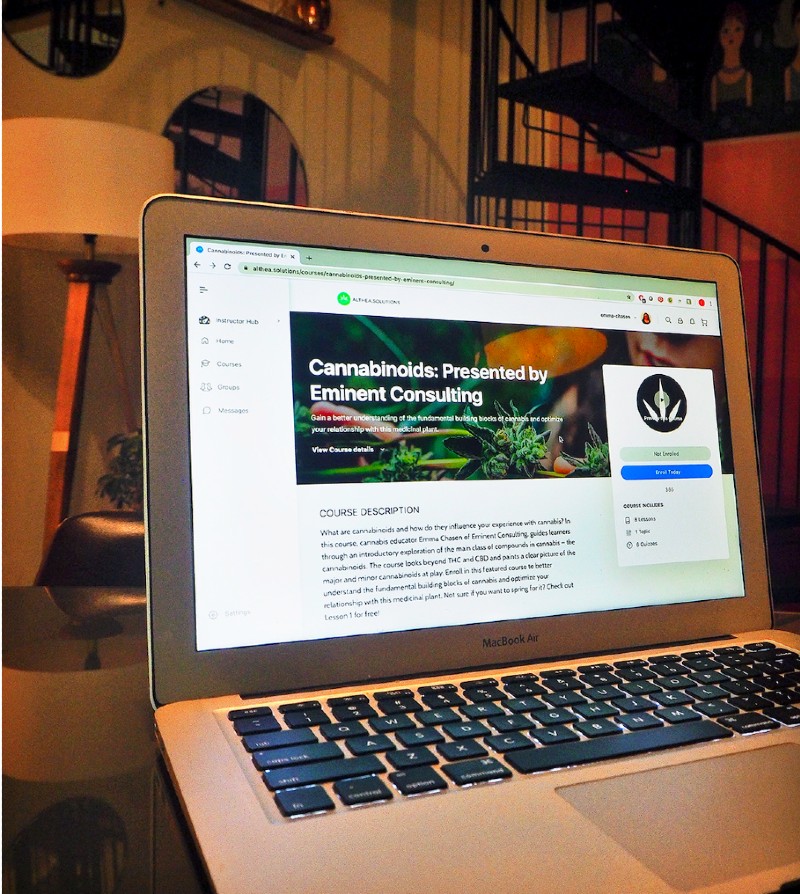 The education program has been 4 years in the making, from when Chasen wrote the first draft of the curriculum to Eminent’s online launch of the program this year.

In that time the curriculum has been vetted by everyone from legacy operators to brand-new budtenders, many of whom Chasen taught at large workshops she held over the years to test the curriculum in Portland.

Through its many iterations, however, the program never lost touch with it’s intended audience: budtenders just trying to do the best job they can.

“I always harken back to that time when I was the person behind the counter, explaining things to people,” says Chasen. “As a new budtender going into that role, I would have been so much more prepared if I had something like this program.”