52% of Britons support the legalisation of cannabis in the UK

A YouGov survey has today shown that 52% of Britons support the legalisation of cannabis, vs 32% who are against. 15% of respondents said they did not know if cannabis should be legalised.

The survey was conducted on April 6th by YouGov, in the wake of comments made by Mayor Of London Sadiq Khan. Kahn stated that he would establish a commission to look at the use of drugs in London if he is re-elected next month, in an attempt to take cannabis out of the hands of criminals.

Support for the legalisation of cannabis was positive in almost all age groups surveyed. Only the over 65’s were narrowly against, with 44% saying they did no support change vs 40% who did. 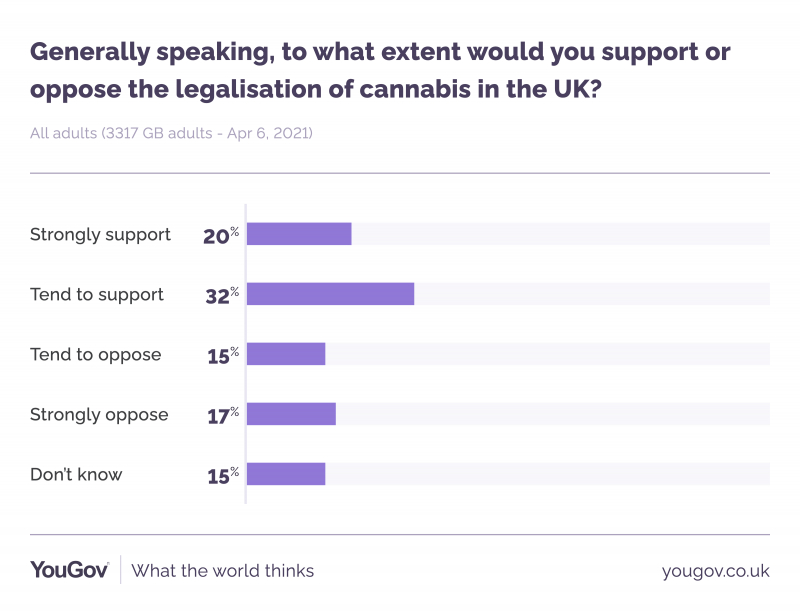 Sadiq Khan’s comments were dismissed by Downing Street earlier in the day. The Prime Minister’s press secretary, Allegra Stratton said that Boris Johnson has “absolutely no intention of legalising cannabis” and insisted that policy on controlled drugs was a matter for central Government and not for the Mayor. However, earlier this year, a video from 2000 was circulated heavily on social media showing the Prime Minister questioning why his “respectable neighbours who roll up a spliff and quietly smoke it together” were “in breach of the law?”

VIDEO. In the year 2000, @BorisJohnson asks why his "respectable neighbours who roll up a spliff and quietly smoke it together" are "in breach of the law"? #cannabis #drugspolicy pic.twitter.com/Lib6iy4kUr

Cannabis remains the most popular regulated drug in the country. In 2019/20, 29.6 % of people surveyed in England and Wales aged between 16 and 59 had used cannabis at least once during their lifetime. A 2020 report by Prohibition Partners estimated that by 2024, a legalised cannabis market in the UK could be worth over £2 billion.